* A-mont provides a customized uniform making service
that corresponds with the company’s identity and concept.

We always think that it is the most crucial thing for us to keep our customers who wear clothes in good condition to move freely while wearing our clothes.


In 1971, Starbucks was founded by three partners in Seattle, Washington.

In 1997, Sinsegae, Inc. signed a contract with the U.S. head office of Starbucks and opened the first branch in Korea in 1999.

In 2000, Starbucks Korea was established as a joint cooperation with the joint investment of the head office of Starbucks and Sinsegae, Inc.

And recently in 2020, the 1,000th branch was opened as the Chungdam star branch.

This is a chef coat designed for the R&D laboratory in the head office of Starbucks Korea.

As a classic uniform, the A-mont special chef coat gives a high-class but relaxed vibe.

It is designed with a pin-tuck crease on the side. It is also designed to wear without a button on the top of the neck.


The imported fabric, that is best for chef wear,

features a DRY UP function that helps the coat dry faster.
The cut opened part of the back is meshed in order to maximize the breathability.

that quickly writes the initials with the
selected color and font on a preferred area.

This window will automatically close when payment is processed.
Do not close this window until processing completes. 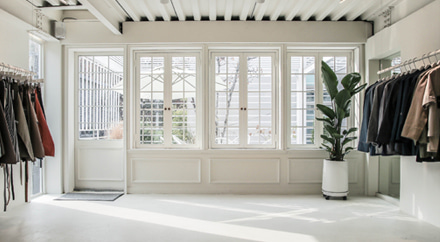